Saturday, July 17, 2021 at 7:30 p.m.
This event has been rescheduled to this new date! The Box Office is in the process of contacting patrons who had tickets to the previous date. If the new date works for you, keep your ticket(s) and no further action is necessary.
Tacoma Arts Live
Tickets: $22, $35, $52 $65
buy tickets
My show in Tacoma on December 11th, 2020 is rescheduled for July 17, 2021. Third time's a charm. All tickets for the original date and showtime will be honored for the rescheduled date. Can't make the new date? Tacoma Arts Live Box Office will be reaching out soon to make arrangements for an exchange or refund. I'll miss you. I love you. In the meantime, I am prescribing some laughter

The humorist, author, and comedian known for her clever, observational humor, and spontaneous wit returns to Tacoma! When she isn’t collecting hotel soaps while on tour or panel-ing on NPR’s #1 show, Wait, Wait...Don't Tell Me!, Paula hosts the popular Starburns Audio podcast, Nobody Listens to Paula Poundstone. Nobody is a comedy field guide to life complete with taste tests, cats of the weeks and leading experts in everything from beekeeping to ping pong to prosopagnosia (say that 3 times fast).

She can be heard on the big screen as “Forgetter Paula” in Disney/Pixar's Inside Out, winner of the 2017 Academy Award for Best Animated Feature Film. She has also starred in her own series on both HBO and ABC, is included on Comedy Central’s Top 100 Comics of All Time and won an American Comedy Award for Best Female Stand-Up. In February 2019, Paula’s stand-up special, Cats, Cops and Stuff was named by TIME Magazine and Tig Notaro as one of The 5 Funniest Stand-Up Specials Ever. 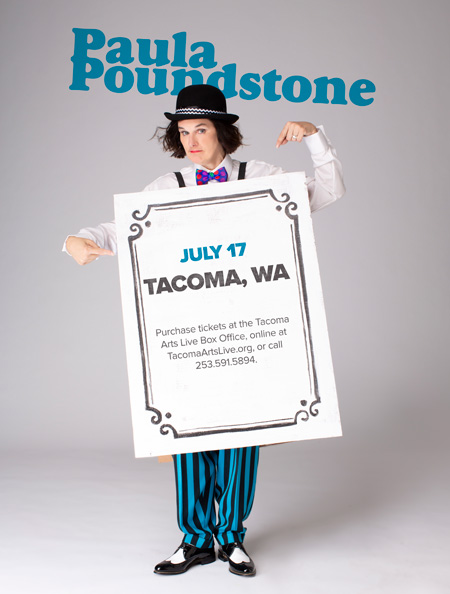 “…the bravest and best improve comic of our time.”
— Garrison Keillor