with opening act The Happy Sinners

Saturday, July 20, 2019 at 7:30 p.m.
Rialto Theater
Tickets: $19, $29, $39
buy tickets
: Music fans will recognize them from their various other outfits (Punch Brothers, David Rawlings, Crooked Still, A Prairie Home Companion) and enjoy this unique instrumental offering.
Haas Kowert Tice asked the question, what if? After forging their own brand of roots music—one grounded in timeless tradition, crafted by top-shelf musicianship, and performed with jubilant comradery—what if this trio of America's finest string players became a quartet?
Brittany Haas (fiddle), Paul Kowert (bass), and Jordan Tice (guitar) own the sweat equity of a decade spent stoking the fires of their passion project. Haas, whose 2004 self-titled release instantly became the touchstone for a generation of old-time fiddlers, has since lent her sound to Crooked Still, Live From Here, Michael Daves - and David Rawlings, where she plays alongside Kowert, well known as Punch Brothers’ virtuosic bass player. Tice is a rare guitar player whose music showcases his unique identity and a particular knack for tune-writing. Haas Kowert Tice was a special road they could travel together. Where communication was intuitive, then innovative. Where musical curiosity was boundless and inspiring for each as writers, players, and friends.
Their 2004 album You Got This displays a breadth of acumen and ambition rarely heard on a band's debut. Norwegian dance rhythms astride traditional Appalachian folk, bluegrass woven progressively into fundamental notions of jazz and chamber music. But for all their success, they found themselves grinding hard through recording sessions for a follow-up record. “I felt like we were missing an element,” says Kowert; “the sound was incomplete.” “We recorded this collection of music first as a trio,” remembers Tice. “Upon listening back to those sessions we kept yearning for more rhythmic energy and robustness in the ensemble sound, so we cut the tunes again with special guests on mandolin and percussion before realizing that what we really wanted was a fourth member to round out the band.”
Enter Dominick Leslie, the versatile mandolinist whose rhythmic sensibility has made him ubiquitous on the acoustic music scene (Noam Pikelny, The Deadly Gentlemen, Brotet). They had all already known each other for years. The trio wanted the rhythmic backbone he offered, and another plectrum to balance the dueling bows of bass and fiddle. His addition thickens the sound and tightens the groove, opening new creative doors. In short, Leslie is a great fit. Says Tice, "because of the time we shared coming up in the same scene, being inspired by the same music, and collaborating in various projects, Dominick was able to instantly find a voice in our music, seamlessly filling it out.” “They have such an established chemistry as a trio, jumping into the mix felt natural,” remarks Dominick.
Reborn a foursome, they recut the music for the next album. The release of Unless, in reality Hawktail's debut, is certain to confirm that this quartet has found its wings. “It feels as though this is now a whole band capable of doing anything,” says Haas. “The music of Unless represents hours of creation, founded on our years as close friends. And I think you can hear that,” she continues. Kowert adds, “we strove to write strong tunes that could take us to different places while holding to a simple form, for a natural music that breathes. Melodies and basslines arrived together with a core sound, and arrangements seemed encoded in the tunes.”
With Unless, Hawktail has delivered an album of original instrumental music that showcases their unique talents. A mixture of recordings from the studio and from shows, this album was written to be played live for people in a room. The inclusiveness of that extends beyond the speakers: a finger on the string, a rush of energy when you didn’t expect it - this is music made to be enjoyed. 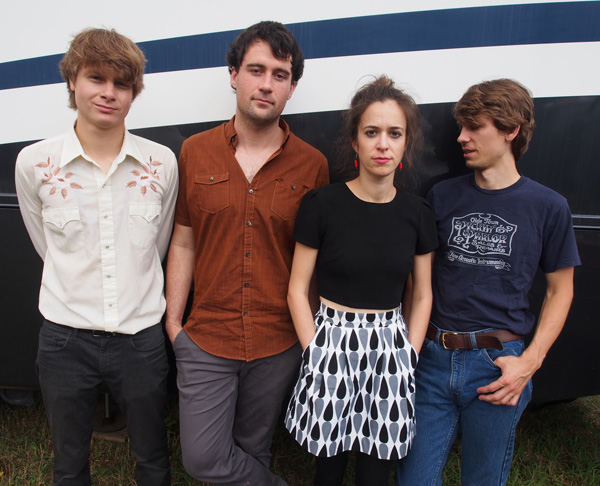 “Any ensemble that bravely forfeits vocals – and there aren’t many – has to rely on creative arrangements and captivating performances to score with audiences. Hawktail easily checks those boxes …”
— American Songwriter