History of The Pantages Theater 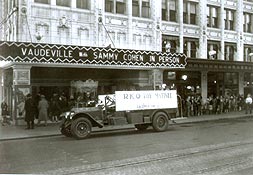 The block now occupied by the Pantages Theater was once the site of a saloon, Tacoma's first library, and Tacoma's first department store. In 1908, William Jones of Walla Walla bought the block and razed the buildings. Then entered the Greek immigrant, Alexander Pantages, who had dreams of owning beautiful and successful vaudeville theaters across the country. With some financial assistance from his mistress and business partner, Kate Rockwell (Klondike Kate), Pantages and Jones were able to build the combination office building and theater- the Jones Building and Pantages Theater-at a cost of $400,000. Construction began in 1916, and the new Pantages Theater, the second of the Pantages chain, opened in January 1918. 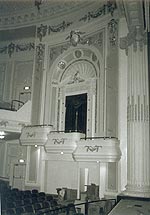 Often regarded as the most beautiful, the Tacoma Pantages was designed by Seattle architect B. Marcus Priteca after an ornate theater in the Palace of Versailles. The Tacoma Pantages served as a live theater for only eight years before being converted to a movie house and being sold to RKO, at which time the name was changed to The Orpheum. In 1932, the theater was purchased by Will Conner of Tacoma and was known as the Roxy until the 1980's when it was renamed the Pantages Theater.

History of The Rialto Theater 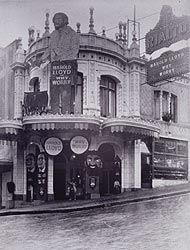 Hailed as “the ultimate photoplay house,” the Beaux-Arts style Rialto opened September 7, 1918. Tacoma's Rialto was part of a national movie house chain and as such, the stage space, orchestra pit and dressing rooms were at a bare minimum. The lobby was also considerably smaller than the current one we see today.

These vaudeville-era theater architects concentrated on the auditorium, seeking acoustically successful theaters and concert halls as models for the ones they designed. The Rialto resembles Vienna's 1916 Redoutensaal, the first “shoe box” shaped orchestral hall. Much of the original ornate plaster decoration-including replicas of cupids and patriotic eagles-remains in good shape today.

By the 1990s, when Tacoma and the Broadway Theater District took on the task of restoring the Rialto, it had become a run-down, second-run discount movie house. Today it is once again an active player in the prosperity of downtown Tacoma.

History of Theatre on the Square 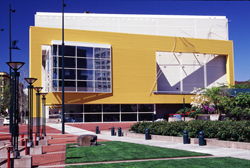 The third theater, Theatre on the Square, was designed by architects Broome, Oringdulph, O'Toole, Rudolf, Boles and Associates of Portland, Oregon, with Jones & Roberts Company of Lacey overseeing construction.

$11.8 million raised from private and public sectors provided the foundation for a revitalized theater district. Opened in October 1993, the 302-seat theater and a new rehearsal hall sit adjacent to the Pantages. Theatre on the Square has full production capabilities including a rehearsal room and studio space.

The Pantages Theater, built in 1918 by Alexander Pantages, was partially funded with financial assistance from his mistress, Kate Rockwell. Known as “Klondike Kate” and “Queen of the Yukon”, she brought grace and style to the dance halls and saloons of the Pacific Northwest. She held miners spellbound with her flame dance and took their breath away when she appeared in a $1,500 French gown. Her lush ballads brought tears to their eyes and inspired a shower of gold nuggets.

Between performances she would dance with lonely miners for a dollar a dance and drink champagne with them for which she received $7.50 a bottle. “We were vendors of laughter and music to men who were starved for beauty and gaiety,” she said. “And we give good measure for all the gold the miners showered upon us.”

In the first four months she was in Dawson, Alaska, Kate received a hundred proposals of marriage, though the only man she wanted to marry was Alexander Pantages, who in the end, took her money and broke her heart. After Pantages married a woman of higher social standing, Kate sued him but never fully recovered her financial loss. She struggled for the rest of her life to make ends meet.

Rumor has it that a ghost haunts the Pantages. No one knows for sure whether it is Kate or Alexander, but one thing we do know is you'll never have a chance to solve this mystery without visiting the Historic Pantages Theater!

Click here to take virtual tour of all of our venues!